This originally appeared on the blog of ReformJudaism.org. 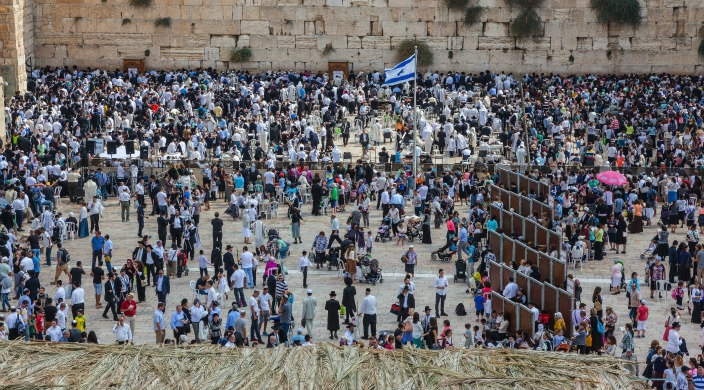 And Israel encamped [at Sinai] as one person with one mind.
— Rashi on Exodus 19:3

Remarkable unity characterized the Jewish people in the days before receiving Torah at Sinai, an event we commemorate on Shavuot, the Feast of Weeks. As a student in Jerusalem one year, I experienced that unity powerfully on Shavuot. At the end of the traditional all-night learning session, I joined thousands of others streaming toward the Old City. We poured into the Western Wall plaza and I nestled myself in with one prayer group among the hundreds. Tens of thousands of people packed the plaza, a sea of white prayer shawls and people swaying together to the sounds of our ancient liturgy. Indeed, my sense of oneness with the Jewish people at that moment was “like one person with one mind.”

The next year was very different. I finished the night of study in Jerusalem with friends from one of the liberal Jewish seminaries. Again, we joined the masses walking to the Old City, this time with our own Torah scroll in hand. When we arrived at the Western Wall plaza we set up our prayer service toward the back, away from many of the other groups. My friend started the morning blessings, our group of men and women standing around him.

Almost immediately, a man with a prayer shawl ran up to our table and yelled at us in Hebrew, motioning with his hands for us to leave. “Forbidden! Forbidden!” he called out repeatedly, gesticulating wildly. He was drawing attention and more people began to approach. A guard told us to move to an area in back of the plaza and up some stairs. We were not prepared for a major confrontation, so we moved to this area called “The Archeological Garden,” a quiet and lovely place to pray, so we began again.

Again, within moments, a man stuck his head out a window in his home near the garden and yelled those same words, “Forbidden! Forbidden!” My friend walked over and spoke quietly with him, assuring him that we were permitted to pray – men and women together – in this area. After a short conversation the man calmed down and we continued until we were finished.

The unity and the feeling of the year before were gone. I felt marginalized, separate, and disrespected, humiliated and furious all at once. This was my first experience with the depth of divisions in the Jewish people, divisions so deep that the Orthodox majority felt empowered to marginalize liberal Jews who came to celebrate receiving our shared inheritance, the Torah. I realized that the unity I had felt a year earlier was merely an illusion. Could a Jewish community this fractured ever be whole enough to stand again at Sinai?

This ancient story about receiving the Torah provides a way forward. The Talmud, in Shabbat 88b, tells us that when the Torah originally was presented to the Israelites, God held the mountain over their head and basically said, “I’m making you an offer you can’t refuse. Accept the Torah, or else.” Commenting on this coercion, one of the rabbis of the Talmud explained that the Jewish people can’t be held accountable to fulfill the Torah because they only accepted it under duress. Another rabbi agreed but added that, during the time of Esther and Mordechai, hundreds of years later in Persia, the Jews accepted the Torah voluntarily and thus are obligated in its fulfillment.

In the language of community organizing, the two different models of receiving Torah are called “power over” and “power with.” A power over model features domination and coercion.  God, so to speak, forced a unified acceptance of the Torah. A power with model invites people into participation, as Esther did by making herself vulnerable and asking the Jews of Shushan to unify together in a three-day fast.

In a power over model, the dominant group forces its vision and understanding of the world on everyone else – which is what happens at the Western Wall. Those who reject the dominant perspective are marginalized, threatened, and discounted. A power with model emphasizes sharing power and raising up previously marginalized voices for the good of the whole.

Only the power with model will help the Jewish people – in all our diversity of thought – achieve unity. The more one segment tries to impose its will on others, the more resistance and division it will create. If you sense your community is unified, who might be on the margins, not feeling that unity? In what ways does the dominant group in your community impose its will on the collective?

The key is for us to employ a power with approach – listening, not telling; cultivating curiosity for Torah, not imposing our approach; and making room for diverse perspectives. Although a power over approach may be easier, it won’t create unity. Knowing that real unity involves every voice, on Shavuot, let us commit to learn how others make sense of our shared Torah and bring people in from the margins.

This originally appeared on the blog of ReformJudaism.org.