Is Putting One’s Life on the Line to Stand Up To Oppression a Jewish Value? Reflections on Non-Violent Resistance on Martin Luther King, Jr. Day 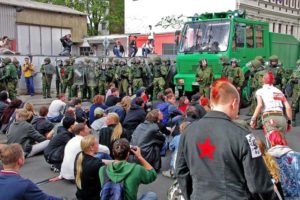 This blog was originally posted on Jewschool as part of their #TorahFortheResistance series. To see the original post, click here.

Activists approached a deportation bus convoy carrying immigrants as they stopped at a light, several literally placing their heads under the front and back wheels of each bus as others approached the front of the bus holding a sign letting the drivers know that if they moved the bus, innocent people would die. These individuals risked their lives to get justice for America’s undocumented communities.

I wept. I wondered why most members of my own American Jewish community, by comparison, would not be willing to take anything like that risk to stand up to our nation’s most egregious injustices of our lifetimes, when others were risking everything.

This piece shook me when I first read it because I knew I would not be willing to risk my life like this.  Indeed, my first reaction was that risking one’s life in this way is not Jewish. Our religion exhorts us to “choose life” and “Guard your well-being” and “do not rely on miracles.”  This type of self-sacrifice grows more from a Christian sensibility of martyrdom and redemptive suffering.

But I was actually giving myself too easy an out.  In the center of our master narrative we have the example of Moses, willing to give his life in solidarity with his people.  Rabbi Nosson Zvi Finkel, the founder of the Slobodka school of Mussar (d. 1927) and trainer of several generations of Jewish leaders, writes that neither Noah or Abraham were on the spiritual level of Moshe. Why not? When confronted with the destruction of the world, Noah never argued for, or prayed for the world to be saved. He went about his business building an ark, as God instructed him, but he didn’t challenge God.  Abraham challenged God for not acting justly and potentially killing the righteous with the wicked in Sodom. Abraham fought for, and prayed for justice – this was better than what Noah did.  But only Moshe actually put his own life on the line for the people. When God said (after the golden calf) that God was going to destroy the people and start again with Moshe, Moshe responded, “if you are not going to forgive them, then take my life also.”  This powerful act of solidarity with his community convinced God to back down and forgive the people.  Rabbi Finkel challenges us to live at that level of empathy and self-sacrifice (Ohr Hatzafun p. 73).

Furthermore, putting one’s life at risk to act righteously in the face of oppression also has its place in Jewish legal tradition.  Kiddush Hashem, “Sanctifying of the Divine Name” is the public display of righteous behavior by Jews, including offering one’s life to do the right thing.  This concept is well-established in Jewish legal codes. Among others, Maimonides codifies that one is to die rather than violate certain Torah prohibitions such as murder, idol worship and incest.  In a time of oppression, when the oppressor demands violation of the commandments, martyrdom extends to even minor mitzvot.  The medieval Crusade Chronicles document multiple incidents of entire Jewish communities sacrificing their lives rather than undergo forced conversion to Christianity.

Willingness to make the ultimate sacrifice is, indeed, a Jewish sensibility.  However, it is a sensibility that is carefully limited. The weight of our 2000 year-old rabbinic tradition leans against this type of dramatic martyrdom and exhorts us to “Live by the commandments and not die by them.”  Thus, the challenge Cotler poses to our community raises the additional question whether it is appropriate and ethical to expand the concept of putting one’s life in danger beyond several core commandments and beyond deep solidarity with our own Jewish community.  This is a serious question that deserves careful consideration.  With some trepidation I am going to assume, for now, that it does make ethical sense to expand these concepts and explore how Jews might spiritually prepare to put ourselves in situations that may risk our lives to act in solidarity with oppressed peoples and stand up to injustice.

In a time of oppression, when Jews are being forced to violate Jewish law, it is a mitzvah to sacrifice oneself rather than violate the law.  In a very graphic way this communicates to all that there are values greater than life itself. Perhaps we can expand this idea to the contemporary situation and say that in times of social oppression, when core Jewish principles like, “Love the stranger” are being violated by cruel public policies toward undocumented immigrants, it is our responsibility as community who believe deeply in these principles, and stand in solidarity with these vulnerable people, to be willing to make significant self-sacrifice to oppose these hurtful policies.

To be willing to make this sacrifice takes a tremendous sense of fidelity to the commandments and solidarity with the people suffering.  Preparation for this level of self-sacrifice will take building this deep commitment to the commandment itself and to the people impacted by the unjust laws.  It is in building this inner-commitment that the Mussar tradition has much to offer by way of practical wisdom. Rabbi Israel Salanter, the founder of the 19th century Mussar movement, developed a method of personal and communal transformation based on deeply internalizing ethical precepts through study, reflection, emotional catharsis and action.  We can apply this method to our preparation for putting ourselves on the line to fight injustice.

The first stage is intellectual and, in the case of fighting the oppression of undocumented immigrants, would involve deep study of the Torah concept of loving the stranger. This could be done through traditional study of Biblical and Rabbinic sources as well as learning as much as possible about the actual current immigration system, policies of the government and effect on actual people.  In some way this is similar to research stage of a Non-Violent Disobedience campaign (According to Dr. Martin Luther King, Jr., “In any nonviolent campaign there are four basic steps: collection of the facts to determine whether injustices exist; negotiation; self-purification; and direct action.”)

The second stage is affective and would involve deeply integrating the teachings above.  This involves relating the teachings to one’s own family and collective experience as strangers. This could be accomplished through talking with relatives and studying the actual history of the Jewish immigrant experience. It also includes doing the emotional work involved in feeling one’s own vulnerability as a “stranger” and where one was mistreated personally and mistreats others.  This work can be done in carefully constructed, supportive group environments that encourage deep introspection and emotional catharsis.

The affective stage also involves developing real solidarity with people suffering now.  This can be done through a combination of learning about real stories of contemporary undocumented immigrants and forming real relationships.  This stage includes engaging in increasingly challenging levels of action standing up against the oppressive policies.  Activists can start with driving an undocumented person to an appointment, then accompanying them to a meeting, making a visit to a detention center, then engaging in a street protest, then risking arrest in a non-violent direct action that interrupts the deportation machine. These engagements need to be framed within a group process in which the activist is constantly revisiting their own privilege and real relationship with the oppressed group to develop solidarity, rather than pity and sympathy.  No one should be accepted for an action that risks lives without already participating in many other, less intense, forms of support and solidarity.  Organizers will need to be thoughtful about the risk levels different people are taking based on their racial, age and other demographic factors.

This process of cognitive and affective preparation for extreme acts of solidarity can help develop a cadre of Jews ready to act boldly for our values.  Ethical concerns about encouraging people to put their lives on the line need to be seriously debated.  If we determine that this moment indeed calls on us to take such a bold stand, we have the spiritual technologies from our rich Jewish tradition to prepare well for call.