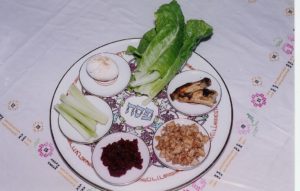 Jews around the world will say the following words at the opening of their Passover seder:

“Let all who are hungry come and eat; Let all who need come and join in the celebrating of the Passover.”

This declaration of radical inclusivity stands in stark contrast to the restrictions as to who could participate in the Passover meal at the moment of leaving Egypt and during Biblical times when the Temple stood in Jerusalem and an actual Passover lamb was sacrificed to be eaten at the Seder.  For example, your guest list needed to be set well in advance. Each person who would be partaking of a particular lamb would need to be assigned to that lamb before it was sacrificed at the Temple. No last minute guests!  Exodus 12:43-8 explain further restrictions on who could partake of the Passover lamb – only full citizens of the Jewish nation, which excluded resident aliens and uncircumcised servants.

Why such exclusivity in Temple times and such inclusivity in the Passover text that we use today (and have for the past 1800 years)?

The Passover Hagadah (Script for Passover night) developed after the Temple in Jerusalem was destroyed.  It is essentially an exilic text.  This could be the reason for the difference.  When the Jewish people lived in their own land it is possible that everyone had a place. At least theoretically, everyone was attached to a family that had an ancestral plot of land.  Everyone had a place to go and a family to be with for the seder.  Certainly the Torah exhorts the citizens to care for an even love the foreigners in their midst, but on this one night that commemorates the birth of the nation, the focus is on the in-group themselves.

After the Temple was destroyed and the Jewish people exiled from their land, we became refugees without a permanent home.  Our families and tribes were broken up and many people were left on their own.  In this kind of world we need to make space for each other and invite each other in. We need to become one big family for each other and create home.  Indeed, Maimonides describes the greatest joy we can achieve on holidays is not eating and drinking, but inviting people into our homes who may not have otherwise been alone.

In this exilic, inclusive world, often the choice is on the individual whether they will include or exclude themselves from participation.  This is the character of the “Wicked Child” in the Seder who seems to exclude himself from the community.  We need to ask ourselves how much we choose to leave ourselves out or join with community.  But there is another, crucial question. Even though formal barriers to inclusion are gone (symbolized by not having an actual Passover lamb sacrifice), how much do we set up other barriers to inclusion in our Jewish community? How do we create barriers to women’s participation, Jews of color, children, differently abled, LGBTQ and other people who, for whatever reasons, are not in the “mainstream”?  And inclusion is not just about removing barriers, such as building a ramp instead of a staircase. It is also about enticing people to come in.  In a graphic midrash, the Israelites were understandably reluctant to do the necessary circumcision to partake in the Passover lamb the night before leaving Egypt.  God instructs Moses to BBQ the Passover lamb and then sends winds to blow the smell of the meat for miles around to entice the people to do what it took to join in the feast.  What can we do to make our gatherings and joining in the Jewish community in general, more enticing?

This dynamic of inclusivity and exclusivity poses many questions for us, including for us as a United States.  Are we a nation of immigrants and refugees that needs to make space for each other and others coming in, or are we a nation like all other nations and is more exclusive?

I wish you all a liberating Pesach where we figure out how to strengthen our core (personal, communal and national) AND bring everyone along at the same time.