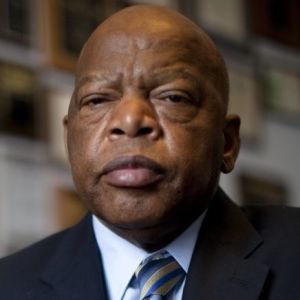 In synagogues around the world the following words were read this morning from the Book of Exodus (Exodus, chapter 1), “A new king arose over Egypt who did not know Joseph.” There is a debate in the Talmud (Sota 11a) whether he really didn’t know Joseph, or he just acted like he didn’t know Joseph, meaning that he ignored all that Joseph had done to help Egypt. Related to this latter interpretation, Rabbi Saadia Gaon (d. 10th century Iraq) points out that he didn’t want to acknowledge all the good Joseph had done for Egypt because if he acknowledged it he couldn’t go forward with his program of oppression towards Joseph’s people.

The timing of these words is striking here on Martin Luther King, Jr. day and the week of the inauguration of Donald Trump. As many know, over the weekend President elect Trump belittled civil rights hero John Lewis’ contributions, saying that he was “all talk.” Lewis is the last living keynote speaker from the March on Washington and suffered physical beatings and jail time for his activism during the US Civil Rights Movement in the early 1960s. In some ways Lewis is Joseph, representing the great contributions of the men and women of that era to helping this country move closer to living its ideals of equal justice and away from its racist, slavery-based foundations. Trump, our new “king,” doesn’t want to acknowledge these contributions because they upset his and advisor Steve Bannon’s narrative of white, Christian victimhood at the hands of the political correctness police. Acknowledging Lewis and the Civil Rights Movement’s contributions would upset the legislative agenda of rolling back the Voting Rights Act to prevent black and brown people from voting, kicking millions off health insurance, fortifying the for-profit prison industry that effectively disenfranchises huge numbers of black men and women and making permanent “strangers” of Muslims and immigrants. The disparagement of Lewis is part of a broader strategy to erase from the collective memory the ugliness of legal segregation and replace it with a false picture of how good things were when wealthy, white Christian men were unchallenged in their dominance.

Just like the beginning of Exodus describes a period of despair among the Israelites under the oppression, until they finally cry out (Exodus 2:23) and God sends a redeemer, so many of us may feel despair under the weight of this new administration. The message of Exodus, and of MLK day, is that resistance does matter. Resistance can look like a collective shout, or like a collective fight. Whatever it is, we can remember our history clearly and not be fooled by ridicule and attacks from those who would take away hard won gains on the march toward equal justice and freedom. Let’s not be like the white liberals who Rev. King describes as bigger obstacles than white racists because they kept telling the civil rights activists to wait and be more patient. In the words of my undergraduate history professor Michael Kammens, “amnesia is more likely to be induced by the desire for reconciliation.”

My we be inspired this MLK day to never forget the brutal, racist history of this country, the courageous sacrifice so many made to make our nation fairer and freer and the need to keep fighting for the ideals of equal justice for all. With our new “king” we need to remember now more than ever.